What is Contributory Negligence and How Does Comparative Negligence Work?

If you thought the fact that you’d been carrying around the sponge they found in your abdomen from that surgery you had two years ago meant a medical malpractice law suit was going to be a slam-dunk, you’d be wrong! So often in such situations the size of an eventual damages award is determined not by what your surgeon did, but by what you didn’t do because, you see, while the surgeon and/or hospital staff owed you a duty to retrieve and properly account for all sponges used in surgery, you owed yourself a duty to be sensible about the periodic “excrutia" you experienced for two years following your surgery. Think comparative negligence!

Comparative Negligence is far and away the most common defense that counsel for the surgeon you are suing, can implement to minimize your eventual award. If counsel can show that you were egregiously negligent in not seeking a medical opinion for the pain you were experiencing when you awoke in the middle of the night every other week or so following your surgery, or the same pain that put you on your knees now and then, then you shirked the duty you owed yourself. For that, you will pay in the form of a reduced damage award because you made it worse than it should have been.

However, in order to fully understand Comparative Negligence, one must have a grasp on the Doctrine of Contributory Negligence, from which it is derived.

Doctrine of Contributory Negligence:
The fundamentals of this law are that if a person’s own negligent behavior, bad judgment, irresponsibility, etc., contributes in any way to causing an accident or injury to themselves, he/she can’t collect any damages from another person or party who subsequently and ultimately caused the accident. Traditionally, contributory negligence was viewed by the judicial system as a complete and total deterrent to recovery of any damages in a lawsuit, for this contribution in fact precipitated the injury or further aggravated the medical condition, and by so doing, disqualified the individual from compensation. Historically, this doctrine came into law as a safeguard or protection against overly sympathetic juries who often ruled in favor of plaintiffs in personal injury cases. However, this doctrine often produced decidedly unfair results as a person who might only be slightly negligent was prevented from recovering any damages at all—even from the party who was found to be much more at fault. Therefore, most states have now adopted doctrines of Comparative Negligence whereby each party’s individual negligence is assessed and calculated and damages are awarded accordingly. Today, there are two distinct categories or “classifications” of Comparative Negligence. These are Pure Comparative Negligence and Modified Comparative Negligence. Furthermore, within Modified Comparative Negligence there are 2 separate distinctions known as the “50% Bar Rule,” and the “51% Bar Rule.” To date, four states and the District of Columbia still recognize the “Pure Contributory Negligence Rule.” All four doctrines are detailed below, in addition to the states that have adopted them.

1. Pure Contributory Negligence:
This doctrine states that a damaged party cannot recover any damages if it is even 1 percent at fault. For example under this rule, a plaintiff found to be even 10 percent at fault for causing self injury, will recover nothing, even though the defendant is 90 percent at fault. There are certain cases in which the contributory negligence defense can be overcome and a highly skilled Medical Malpractice attorney will be critical to this process.

The jurisdictions which employ the Pure Contributory Negligence Rule include Alabama, District of Columbia, Maryland, North Carolina and Virginia.

2. Pure Comparative Negligence:
Plaintiff's damages are totaled and then reduced to reflect his/her percentage contribution to, or responsibility for, the injury. 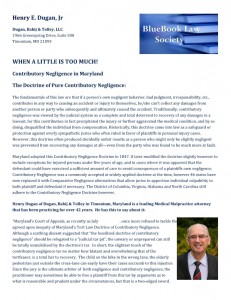