"As a lawyer, you have to decide that there is something more important than money--there is something more important--it is about doing a case right and getting justice for your clients. But what we do is not just important for our clients, but for everybody..... and to make the world safer whether that be safer drugs or safer cars, or finances that people aren't getting cheated on......that is just the kind of work we do. I'm not just a plaintiff's lawyer-- I'm also a public interest lawyer and a consumer advocate."

"Gary shines as the quintessential trial lawyer, a man whose humanity bursts through while he works endlessly to obtain justice for those victimized by the misconduct and negligence of some of the country's most powerful interests. America desperately needs trial lawyers like Gary who hold wrongdoers accountable."

"Gary is one of the great trial lawyers in this country."

- Edwin Train Caldwell, founder of The Other Bar, past president of San Francisco Trial Lawyers Association and recipient of the Lifetime Achievement Award

"I found Mr. Gary Gwilliam of the law firm Gwilliam, Ivary, Chiosso, Cavalli & Brewer. After talking to him, and explaining my case, he took the case. I felt so relaxed talking to Mr. Gwilliam. I knew I had found a firm that believed in my case and as importantly, in me. For the next 8 years and two trials, I would get to know Mr. Gwilliam and his firm very well. I can't say enough about this firm. They worked hard and we won both trials. During both of my trials, I was astonished by Mr. Gwilliam's charismatic demeanor. He would make Perry Mason look like an amateur. He never showed any disrespect for any witness, but had a way of finessing the truth. He stays calm under pressure. He was prepared each and every day. He helped me stay calm. To this day I look at Mr. Gwilliam as my friend, not just my attorney. If you are looking for a fantastic firm, take my word for it. You will never find a better group of attorneys. "

Bachelors of Arts in Psychology, 1959

Board of Governors, 1970-Present

National Board of Trial Advocacy

“Am I Drinking too Much is a Rhetorical Question!” Multiple Publications,  2008- Present

“Getting a Wining Verdict in My Personal Life: A Trial Lawyer Finds His Soul”, Pavior Publishing,2007

Major Contributor/Editor/Interviewee to “Commitment to Justice: A History of the Consumer Attorneys of California”, 2000

“Are Trial Lawyers Becoming Extinct? A Look at Civil Litigation in the Next Millennium”, American Board of Trial Advocates, Voir Dire, 1999

An Historical Perspective of Consumer Attorneys of California and Me”, Forum, 1999

“Techniques for Arguing Damages to a Jury”, Trial Magazine, 1999

“A Practical Presentation of the Use of Jury Consultants in Trial Preparation In Trial”, (With Karen Jo Koonan), Consumer Attorneys of California, 36th Annual Convention Syllabus, 1997

“Proposition 51: The Effect of the Abolition of Joint and Several Liability”, California Trial Lawyers Association Forum, 1986

References in Other Works:

Esteemed Lawyers of America, Admitted in 2014

CLAY Consumer Lawyer of the Year Finalist for Employment, 2002

Trial Lawyers for Public Justice, nominated for Lawyer of the Year Award for work on Adams v. City of Fremont, 1996

California Trial Lawyers Association, Presidential Award for “How to Get a Winning Verdict in your Personal Life” seminars, November 1994

‘Am I Drinking Too Much? A Rhetorical Question’, Continuing Education of the Bar, 2007

‘Getting a Winning Verdict in Your Personal Life: A Discussion of Preventative Ethics’, Continuing Education of the Bar, 2007

Click on image to read the chapters for this case: 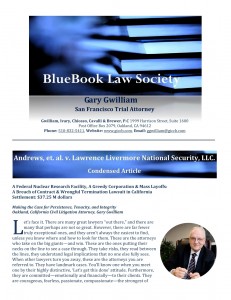 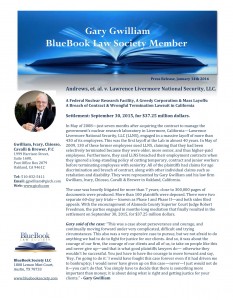