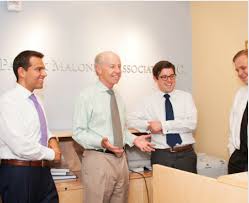 Patrick Malone learned how to ask questions and get answers as an award-winning investigative journalist. Now he is a leading attorney working on behalf of seriously injured people in lawsuits against hospitals, doctors, drug companies, government agencies, and other defendants.  Over the last three decades, he has won a long string of exceptional results for his clients. His new book, The Fearless Cross-Examiner: Win the Witness, Win the Case, was just published by Trial Guides.  Malone is also the author of Winning Medical Malpractice Cases with the Rules of the Road Technique and is co-author of the best-selling advocacy book: Rules of the Road: A Plaintiff Lawyer’s Guide to Proving Liability. He also wrote a book for consumers: The Life You Save: Nine Steps to Finding the Best Medical Care -- and Avoiding the Worst. Patrick Malone is a graduate of Yale Law School and is a member of the Inner Circle of Advocates and a fellow of the International Academy of Trial Lawyers. Malone is a member of the board of trustees of the Pound Civil Justice Institute. Malone has been recognized as a leader in the law by Lawdragon’s 500 Leading Lawyers in America, Super Lawyers, and  The Best Lawyers in America. Malone grew up in Wichita, Kansas,  the oldest of seven children in an Irish Catholic family. Malone and his staff work out of offices in Washington, D.C. a few blocks north of the White House, and they represent clients throughout Maryland, Virginia and the District of Columbia.

• Board of Governors, American Association for Justice, 2011-present.

The Best Lawyers in America (listed since 2006 edition)

• D.C. Bar representative to Law and Science Academy, Einstein Institute for Science, Health and the Courts, 2001-2003.

American Association for the Advancement of Science:

National Board of Trial Advocacy:

• Nina Jones v. Prince George’s County, Maryland, Circuit Court, Prince George’s County, January 2006: $3.7 million verdict for the wrongful death of Prince Jones Jr., a 25-year-old college student who was shot to death by a Prince George's County, Maryland undercover police officer. A jury in Prince George's County Circuit Court awarded $2.5 million to the young daughter of the deceased, Nina Jones, and $200,000 to Prince Jones's father, both of whom were represented by Mr. Malone and his co-counsel, Terrell N. Roberts III. The jury awarded $1 million to Mabel Jones, the mother of the deceased, who had separate lawyers.

• Boone v. Goldberg, Circuit Court, Montgomery County, Maryland, April 2004: $943,000 verdict in for a 62-year-old man whose brain was punctured by an instrument during ear surgery. The surgeon denied anything had happened, and the case was proved by post-operative CT scans. Boone v. Goldberg. The verdict for Mr. Boone was recently reinstated in full by the Maryland Court of Appeals after being partially reversed by an intermediate appellate court.

• Burke v. Groover Christie, Superior Court for the District of Columbia, March 2004.  Verdict for plaintiff in medical malpractice case for $5.7 million against physicians who failed to diagnose impending stroke in 40-year-old patient.

• Berg v. Footer, 673 A.2d 1244 (D.C. 1996) (establishing plaintiff’s right to recover more than the jury’s verdict under some situations where plaintiff struck a good pre-trial settlement with one joint tortfeasor).

• Aguehounde v. District of Columbia, May 1993, Superior Court of the District of Columbia (before Hon. Franklin Burgess): Pedestrian hit in crosswalk by car and rendered quadriplegic. Suit against District of Columbia for negligence in timing yellow light clearance interval at intersection.  Verdict for plaintiff: $7,984,226.20. On appeal, judgment for defendant entered on grounds setting traffic light timing is discretionary function immune from suit. 666 A.2d 443 (D.C. 1995).

1977-78: Journalism Fellow, National Endowment for the Humanities, University of Michigan.

Board of Directors, Catholic Disability Foundation, 2013-  .