"I love my job! At Walkup, Melodia, Kelly & Schoenberger, I get to represent people who are badly injured and do my best to help them out. Frankly, I work with the best people in the world--we all get along so well and have such a good time doing what we do, and that is because we all believe in doing the same thing--doing our best for our clients. We get to do what we want, when we want, how we want -- and always with an eye towards making our case better for our clients, and making their lives better.  That is why I love it here."

"What the Walkup office offers to clients that no other firm in northern California does, is not just our extreme devotion toward our clients, and I mean individual, intense devotion toward them, but we have a group of trial lawyers that have achieved successes that are unparalleled in northern California. The majority of the partners in our firm belong to organizations that are "Invitation Only" groups for the very best trial lawyers, and every lawyer in the firm knows how to try a case with a level of preparation and integrity that causes defense attorneys and insurance companies to sit up and take notice. Typically, our results are better than any other firm in northern California--and have been for years."

Richard H Schoenberger has enjoyed remarkable success in his thirty-year legal career. His outstanding skills and presence in the courtroom have made him one of the most highly respected trial lawyers in California. At various times he has held or shared the record for the largest verdict in particular case types in San Francisco, Sacramento, Santa Clara and San Mateo Counties.

Rich has nine million or multi-million dollar jury verdicts, most recently one for $8.3 million on behalf of a 46 year-old construction hoist operator against an elevator manufacturer. Two of his verdicts have been for substantially greater than $10 million.

Since 2013 alone, Rich has achieved results, either through verdict or settlement, that total more than $75,000,000, including 20 separate million and multi-million dollar recoveries.

Rich was recently selected as the 2016 Best Lawyers in America “Lawyer of the Year” for Personal Injury Litigation – Plaintiffs in the San Francisco area. Only a single lawyer in each practice area and designated metropolitan area is honored as the “Lawyer of the Year”.

In 2011, he was selected as the Trial Lawyer of the Year by the San Francisco Trial Lawyers Association. It was his second nomination for this prestigious award.

For the past six years, Rich has been recognized as one of the "Top 100" lawyers in Northern California, as evaluated by Super Lawyers.

He is "AV" peer review rated by Martindale-Hubbell. Rich has been included in the national publication The Best Lawyers in America for the past eleven years and has been a Super Lawyer in Northern California for every year the designation has existed.

Owing to his many achievements in the courtroom, Rich is an invited member of the most prestigious trial lawyer organizations in the country: The International Academy of Trial Lawyers, The American College of Trial Lawyers, the International Society of Barristers, and the American Board of Trial Advocates, where he recently served as President for the San Francisco Chapter during its 50th Anniversary year. He has recently chaired and presented at various Masters In Trial programs and other programs for ABOTA.

Rich has taught trial advocacy on a national and international level since the early 1990's. In California, he spent years teaching Advanced Trial Practice as an adjunct professor at UC Berkeley School of Law (Boalt Hall). He has also served as a faculty member for the Judicial Council of California's Judicial Studies Program. As a highly rated member of the faculty for the National Institute of Trial Advocacy, Rich has been invited to teach advocacy at NITA's rigorous National, Midwestern, Northwestern, Western and Pacific Regional programs as well as for private firms throughout the country. He is program director for NITA's inaugural Western United States Advanced Trial Program. Rich has also served frequently as a team leader at Emory Law School's renowned Kessler-Eidson Trial Techniques Program in Atlanta, Georgia.

In June of 2004, The American Bar Association, in concert with the Department of Justice's Central European Eurasian Law Initiative, invited Rich to the Republic of Georgia where he taught advocacy to 24 selected attorneys whose government had only recently allowed the right to a jury trial. In 2005, he was invited to lead a similar program in Sarajevo. In 2011, he led a trial advocacy program in Belfast for Northern Ireland solicitors.

After graduating from Santa Clara University in 1982, Rich attended the University of California, Hastings College of the Law. He began practice in 1985 as a Deputy District Attorney in the Alameda County District Attorney's Office, where he prosecuted serious felonies. He joined the Walkup office in August of 1987 and became a partner in 1995. With Walkup, he has tried dozens of cases in more than ten counties throughout the state of California.

In an article printed in the Los Angeles Daily Journal, an opponent was quoted as follows: "Schoenberger is everything that a good plaintiff's lawyer should be: ethical, professional and smart, and he works hard."

As for life outside the law, beginning in 2013, and when not in trial, Rich teaches 6th grade English, Math and mock trial at Bridge the Gap, a wonderful Marin City school designed to prepare at risk youths for high school and college.

For years before that, Rich served as CYO Athletic Director at St. Patrick's in Larkspur and as Minor League Rep for the Twin Cities' Little League Board of Directors. Rich also used to be found on some field or court, having coached more than 30 of his three kids' teams over the last decade. Now he just watches silently from the stands in full recognition that each of his kids is finally being coached by someone who knows what he or she is talking about.

100% of Practice Devoted to Litigation 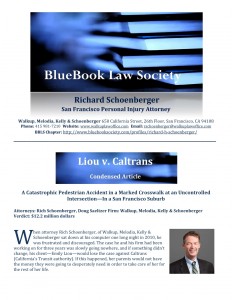 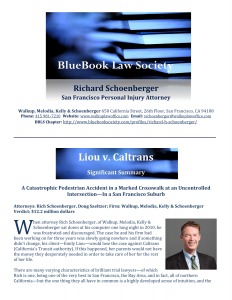